Produced by The Chatham Area Business Alliance (CABA) This aerial view of Chatham gives a unique perspective of the town, with footage of the surrounding farmland as well as the Crandell Theatre.

How Does It Grow? Potatoes

How Does It Grow? is a food education video series and agricultural literacy program dedicated to reconnecting us to where our food comes from. Potatoes follows America’s favorite vegetable from field to factory, showing how potatoes grow and are turned into chips. Locally, Staron Farm is the largest potato grower in Columbia County. Their potatoes go to Vermont, Massachusetts, New York City, and up and down the Hudson Valley. If you’ve eaten French fries at a county fair, chances are the potatoes were grown at Staron Farm!

Meet Andrew Chiappinelli, the owner of Grazin’, the world’s first farm-to-table direct 100% Animal Welfare Approved grassfed and finished burger joint based in Hudson, New York. When it comes to burgers, Andrew is a proud man. It took him 6 long years to get his vision for Grazin’ up and running, and now he finally feels like people are catching on.

Liza de Guia is the Founder and Chief Storyteller of FOOD CURATED, where she has created 150 mini-documentaries about food since August, 2009. She was honored as 2012 NYC Food Filmmaker of the Year and has been nominated for several other food-related awards, including the James Beard Foundation best video broadcast. Liza’s film Happy Sheep: Raising & Shepherding Good Meat at Kinderhook Farm was screened at Farm Film Fest 7.

Boulder beekeeper Tim Brod discusses the value of high quality honey and the importance of maintaining our relationship with the honeybee. Spencer Sarson, a native of Boulder, now shoots video and photography in the San Francisco Bay area.

How Does It Grow? Hydroponic Spinach

How Does It Grow? is a food education video series and agricultural literacy program dedicated to reconnecting all of us to where our food comes from. Hydroponic Spinach explains how spinach – one of the most nutrient-packed food on the planet – grows even in the dead of winter. Locally, The Berry Farm has extensive hydroponic farming operations, growing a wide range of vegetables year round.

60 Tortillas! is about learning what it takes to grow enough wheat to make one tortilla every day for a year. Gretchen, whose film 8 Moons Ripe was screened at Farm Film Fest 7, grew wheat in her backyard garden. The film was shot in Columbia County and features local musicians.

Dairy farmer Rory Delany discusses his experiences with robotic milking machines and his transition from beef to dairy farming. Rory’s farm is near Ballyhaunis in County Mayo, Ireland. Closer to home, A. Ooms and Sons Dairy Farm has converted their operation to robotic milking. See the system in operation as part of the annual Chatham Farm Tour this fall.

Forgotten Farms give us a glimpse into the past and a vision for a future regional food system. It shows the cultural divide between the new food movement and traditional farming. Through conversations with dairy farmers and policy experts, the film reconsiders the role of the vital but sometimes forgotten farmers who will be essential players in an expanded agricultural economy. Screened at FilmColumbia 2016.

Dave Simonds (director) is an actor, writer and filmmaker. He directed Cherry Cottage: the Story of an American House, which has screened at festivals around the country. He directs Simonds Films, which is a full-service boutique production house. As an actor, Dave has worked extensively in New York, and regionally at the Williamstown Theatre Festival, The Long Wharf Theatre, and The Portland State Company.

Sarah Gardner (producer) teaches planning and policy at Williams College and is the Associate Director of the Center for Environmental Studies. Her areas of research and teaching include land use, urban planning, local politics, agriculture and food systems, renewable energy and climate change. Sarah is co-chair of the Williamstown Agricultural Commission and a board member of Berkshire Grown.

Peter Paden, Columbia Land Conservancy Executive Director, will moderate a discussion with local farmers, including time for questions and answers. 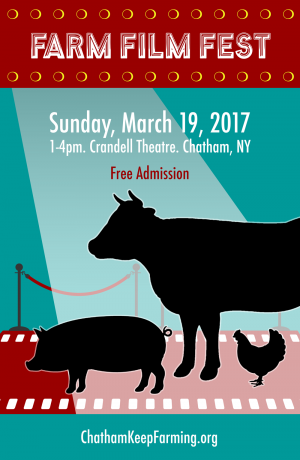