A Family Farm is the story of the farm at 1900 Route 66 in Ghent, NY. From the late 1930s to 1970, the land was known as the Brisklea Farm. Run by the nationally recognized breeder Ralph Cooley and his wife Dot, the farm helped set the stan- dard for the Ayshire cow. The farm was eventually sold and broken up, and the Cooleys retired. More than 30 years later, Carlo and Dominique DeVito restored it to a small, working family farm now known as the Hudson-Chatham Winery.

Medicinal Wetlands is a pilot program about the environmental and cultural history of the Shaker Swamp in New Lebanon, NY – a community project involving a team of scientists, archeologists, historians, and local producers who are exploring the medicinal plants and rich human history of the wetlands. The swamp became an industry birthplace when the first pharmaceutical laboratory and factory in America was built in New Lebanon. The project will document the farming, har- vesting, and distribution of rare, curative plants as well as capture the unique sense of place and continuity of knowledge developed and passed along by generations of skilled practitioners. The film’s director is a Research Associate at the Smithsonian’s National Museum of Natural History Anthropology Department.

Back by popular demand, Chatham Grown gives an introduction to the farmers and farming issues in Chatham, NY, as the town works to maintain its agricultural economy in the midst of development pressures. This film describes the fragility and changing nature of land use patterns and discusses ways that land can be con- served for agricultural use. The story is told in the farmers’ own words. All work on Chatham Grown was done by local residents and the film received its premiere at the 2007 Farm Film Fest. We are proud that director Courtney Hunt has a feature film being presented this month at Sundance Film Festival!

This unique film condenses 40 hours of a weekend at Caretaker Farm, a CSA in Williamstown, MA, into five minutes of screen time. The director wanted the viewer “to be able to see what happens over a weekend on the farm in a different way, especially the sun and other environmental factors that move in a different way than we usually get to see them.” He also wanted to convey the feeling of so much happening at the farm – it’s a busy place. Look closely and you’ll be able to see some details, even during the dark night scenes!

This documentary explores the complex issue of immigrant workers and their place in the American food system. It includes a journey from Florida to New York, including a trip to the Mexican border, revealing the lives and issues of both legal and illegal migrants and farmers working toward a better life. Much of the farming in the Hudson Valley depends upon immigrant workers, yet they are out of sight for most of us. This film was shown at the 2007 New York Annual Farm Bureau meeting to a standing-room-only crowd. It has been shown at numerous film festivals, winning awards.

PREPARE TO MEET YOUR MAKER!

Following the film screenings, you are invited to attend an informal reception upstairs at Peint O’ Gwrw (just down the street). Come and meet the filmmakers, local farmers, and members of Farm Film Fest’s sponsoring organizations: Chatham Agricultural Partnership, the Chatham Film Club, and the Columbia Land Conservancy.Peter Paden, Executive Director of the Columbia Land Conservancy, will facilitatea brief question and answer session. The reception is free of charge. There will be snacks provided and a cash bar.

Special Thanks to Our Sponsors

The Chatham Film Club brings the experience of fine, contemporary, foreign and independent film to the Columbia County community through regular screenings, special events, and other interactive programs. The Film Club hosts screenings in the historic Crandell Theatre the last Sunday of every month. Each quar- ter, they host an after-film discussion, Salon in a Saloon, at Peint O’ Gwrw. FilmColumbia, a curated film festival, is produced and sponsored by the Film Club each year. The 2008 festival will take place Oct.16- 18. The Chatham Film Club presents a free movie in Crellin Park each summer, and sponsors a variety of programs working with fledgling filmmakers from local schools.

The Chatham Agricultural Partnership (CAP) was formed by the Chatham Town Board to implement the recommendationsfromtheChathamKeepFarmingstudythatareincludedinthecomprehensiveplan. The overall goal is to maintain a sustainable agricultural community and economy in Chatham. CAP members include representatives from farming, ag-related businesses, the Town Board, and other interested citizens.

In the past 21 years, Columbia Land Conservancy has established a reputation as one of the country’s leading land trusts. CLC works with individuals and communities to conserve the farmland, forests, wildlife habitat and rural character of Columbia County. Since 1997, the Conservancy has protected 20,000 acres of pri- vately-owned land through conservation easements, established 5,452 acres of public lands in Columbia County, and secured six million dollars in state and private funding to ensure the protection of 6,000 acres ofworkingfarmland. Additionally,theConservancymaintainssixpublicconservationsareas(PCAs)in Columbia County that are open free of charge for year-round recreational use, and provides free, hands-on, interactive learning experiences in outdoor settings to thousands of children and adults each year. Informa- tion on CLC programs, events and initiatives is available at www.clctrust.org.

This program was developed with the goal of including films about different types of farming and issues related to agriculture. The views expressed in these films reflect those of the film- makers and are not necessarily endorsed by the Farm Film Fest or its sponsors. Our goal is to promote a better understanding of farming and ways that viable farming operations can be sustained in our local communities, particularly in Columbia County where agriculture is a key component of the region’s history, economy and culture. 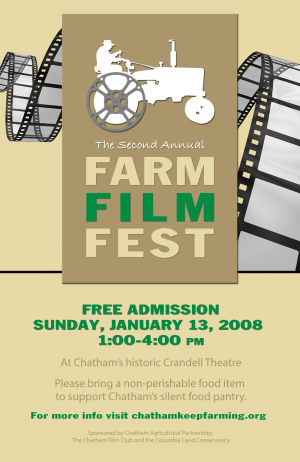