Save Our Seeds: The Hudson Valley Seed Library

Overview of a Hudson Valley organization striving to create an accessible and affordable source of regionally-adapted seeds.

I Am the Animal

Documentary addressing the issue of bee colony collapse at the same time that it presents a window into the fascinating world fo bees and their keepers. This film generated a lot of interest when shown at FilmColumbia 2010.

The life cycle of a robotic chicken in a factory farm, told in a Dada collage-meets-stop-animation style from the point of view of a chicken. Created as part of Meltz’s MFA thesis exhibition at SUNY-Albany.

Overview of an innovative program whose central goal into explore the ecological and cultural patterns present int he Columbia County landscape, focusing on the relationship between agriculture and environment.

Clips of local residents and people at the Chatham Fair talking about the ways that they are inspired by animals. Recently shown at Art for Animals.

Stories of four family farms, a natural foods store committed to supporting them and a community’s passion for fresh, local food. Includes the Thompson-French Farm in Ancram.

Back by popular demand, Chatham Grown gives an introduction to the farmers and farming issues in Chatham as the town works to maintain its agricultural economy in the midst of development pressures. All work on the film was done by local residents and the film received its premiere at the 2007 Farm Film Fest. Since then, more than 800 copies have been distributed.

Please join farmers, filmmakers and friends at the “Meet Your Maker” reception at Print O Gwrw following the films. Cash bar with other refreshments provided. 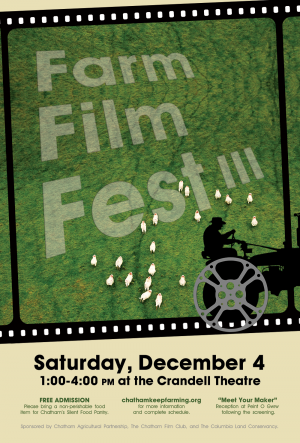