In 2007, three students at Monument Mountain Regional High School started Project Sprout, whose goal was to cultivate an organic farm on school grounds that would grow vegetables for the cafeterias of the district schools, be used as an educational tool, and build connections with the natural world for all students in the community. Over time, the project has far exceeded its goals and now donates produce to families in need, partners with sister projects in Uganda and Senegal, and serves as a model for other schools interested in starting gardens.

Chatham was one of two national pilot sites for the Glynwood Center’s Keep Farming Program in
2005, and this film shows how the lessons learnedin Chatham contributed to the growth and maturity of the program which has since taken root inmany other communities. The film discusses the importance of land, community and infrastructure as components of a regional food system in the Hudson Valley.

This documentary highlighting the New Lebanon farmers’ market won the Chatham Film Club’s 2011 Young Filmmaker Contest and had its premiere at 2011 FilmColumbia.

Up On The Farm

Filmmaker: Diane Nerwen. A video artist andmedia arts educator, her work has been shown internationally, including the Berlin Film Festival, the New York Video Festival, the Museum of Modern Art, the Guggenheim Museum, and the Tate Modern
16 minutes

A meditation on urban green spaces and the post- industrial cityscape, this film explores Brooklyn Grange, a one-acre rooftop organic farm in NYC. Connecting the built and natural environments, this film documents an imaginative experiment in green urban redevelopment and takes a look at an attempt to transform the roof of a century-old former factory into a sustainable, pastoral haven. In keeping with the pastoral spirit, the film has no narration.

Rambling Around with Joe Adee: A Visit with Hopeful Dawn Farm

This film follows Joe Adee as he visits Patty & Bud Goodwin at Hopeful Dawn Farm in Chatham. The accompanying music was written and performed by Joe.

To Make a Farm

Filmmaker: Steve SudermanSteve grew up on a farm in western Canada. He studied Mathematics
and Computer Science and taught high school before pursuing filmmaking in 2002. His first documentary, Over Land, premiered at Les Rencontres Internationales du Documentaire de Montreal (RIDM) in 2008. To Make a Farm is his second documentary.
80 minutes

This feature-length documentary explores the lives of five young people who have decided to become small-scale farmers, despite having no background in this demanding profession. They face daily challenges and set- backs, but their optimism inspires hope for the future.

Filmmaker Steve Suderman searches his own family history in farming to question whether the mistakes of the past can be avoided this time around.

Special thanks to our sponsors

The Chatham Agricultural Partnership, The Chatham Film Club and The Columbia Land Conservancy 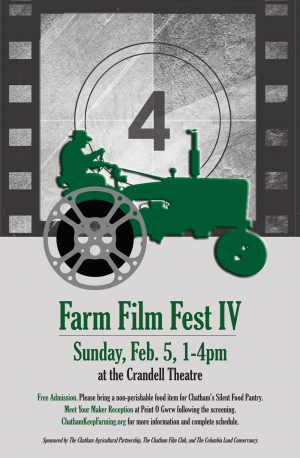