Brunswick is a film about landscape change, told through the personal story of a farmer’s lifelong connection to his now-threatened land. The film weaves together the plight of Sanford Bonesteel, an aging farmer in his 90s, with the dynamics of small-town politics as a residential development is planned on Sanford’s former land. The film takes place in Rensselaer County, where the small country town of Brunswick is facing the challenge of balancing economic growth with the preservation of its rural character. It is a story both specific to Brunswick and yet recognizable to communities all over the U.S.

Brunswick has been shown at the RPI Sustainability Film Series, the Catskill Film and Video Festival, the Kingston Film Festival, the Saratoga Film Forum, and on WHMT (PBS).

About Filmmaker Nate Simms
After spending several years as a still photographer, Nate Simms became involved in documentary filmmaking. With film, he found a new medium for his ongoing interests in natural landscapes and land conservation. Nate continues to focus particularly on land use issues in Rensselaer County. A graduate of Middlebury College, VT, Nate has lived in NY’s Capital District most of his life.

Off-Season is a short observational documentary that follows a woman, for a day, as she takes care of a vegetable farm’s cows during the winter season. With a cinema verité style, the film allows the viewer to experience the daily activities of the farm during off-season. Off-Season has previously played at Emerson College’s It’s All True documentary film festival.

Observational documentaries eschew interviews, voice-over narration and a soundtrack, and instead present footage of real life as it unfolds. The effect is a documentary that tends to show, not tell, and invites each viewer to draw his or her own conclusions from the film.

About Filmmaker Kori Feener
Kori is a documentary filmmaker who received a BA in Film & Media Arts from the University of Tampa and an MFA in Media Art from Emerson College. Other work includes Where There is a Will (2007) and Alpine Zone (2013).

Milk is the first episode in the documentary series, The Big Table, which looks at the lives of food producers. Milk features the Osofsky family, owners of Ronnybrook Farm, who have been milking in the Hudson Valley since the 1940s. The film is a moving portrait of a tightly-knit family that is not only dedicated to the simplicity and authenticity of their product—un-homogenized milk bottled in glass—but also to preserving a way of life on their farmland, where their cows, from Sassy to Cinnamon, are grass-fed, and have roamed this land for several generations.

Milk was first shown at the fifth annual NYC Food Film Festival in October 2011, where it won the Audience Appreciation Award. This will be its first “big screen” showing in Columbia County.

The Last Shepherd is the incredible story of Renato Zucchelli, the last traveling shepherd left in Lombardi, Italy. Renato has a dream: to lead his flock of hundreds of sheep from his beautiful mountain home into the center of Milan, so that local children can learn what farming really looks like. This charming film documents a way of life that is disappearing, while telling the story of a powerful man who believes in the power of his dream.

The Last Shepherd has played at film festivals around the world, including Tokyo, Dubai and the Slamdance Film Festival, and now it has come to Chatham.

About Filmmaker Marco Bonfanti
Marco wrote and directed several short films before he wrote, directed and produced The Last Shepherd, his first documentary. He is a native of Milan, Lombardi, Italy.

Please join us after the screening at Peint O Gwrw at 36 Main Street next to the theatre for the Meet Your Maker Reception. 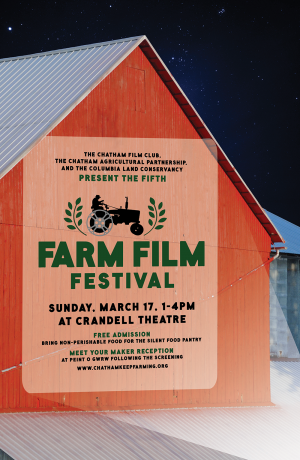