A look back at the 2014 Farm Tour, an annual event where “the barns of Chatham open their doors” and invite the public to learn more about their farming operations.

A story of avian resistance from the “world’s most enlightened city,” Ithaca, New York, where tensions rise when people keep chickens for their personal use, violating the law. The issues we see in the film are similar to those that many municipalities face, including some in Columbia County.

About the filmmaker: Rob Flaherty made this film while a student at Ithaca College.

About the filmmaker: Cathy Grier calls her gritty film making style “lo-fi with a hi-human content.” She is also known as NYCSubwayGirl where she has been performing folk-blues in the NYC subways and stations since 1999. With the advent of small cameras and smart phones, Cathy began spontaneously filming people who stopped by her public space performances and asked a simple yet complex question, “What inspires you?” Her Inspiration Project web series has hundreds of short films and won Best Documentary Web Series at the 2014 Chain Film Festival in Long Island City, NY.

By mid-century, 90% of the world’s commercial fish may be tapped out. But we’re not sunk yet. Set sail with a different breed of fishermen who make their living on the water while also treading lightly upon it. Meet old school fishermen in the Pacific Northwest reviving the tuna industry and young fishermen (and women) creating Community Supported Fisheries.

About the filmmaker: Greg Roden directed and produced Go Fish! as part of the PBS Television Food Forward series that was filmed over 70 shooting days in the field in 2013. The series profiles “food rebels” who are working on important topics as they strive to improve, and provide, alternatives to the industrialized food system. All 13 episodes are available online at video.pbs.org for streaming.

Pride in the Past; Faith in the Future

The Trowbridge family of Ghent, New York, lives each day with pride in the past and faith in the future on the family’s Angus farm. Their strong work ethic, belief in family and commitment to the community is their signature. They are passionate about being part of the local agriculture community and delivering great beef to customers.

About the filmmaker: Colvin Films is part of the Certified Angus Beef™ brand’s graphics department.

How a local farm dedicated to producing great tasting meat also prides themselves on the care and concern they give to each and every animal.

About the filmmaker: Liza de Guia is the Founder and Chief Storyteller of FOOD CURATED, where she has created 150 mini-documentaries about food since August, 2009. She was honored as 2012 NYC Food Filmmaker of the Year and has been nominated for several other food-related awards, including the James Beard Foundation best video broadcast.

The Meat of the Matter

Cheap meat is actually quite costly, taking its toll on America’s health and the environment. The good news is it’s now possible to have your steak and eat it, too. Meet a new breed of ranchers who are leading the red meat revolution by returning to traditional styles of raising cattle. Iowan bison ranchers, Georgian cattlemen and California cowgirls all have one thing in common – grass.

About the filmmaker: Greg Roden directed and produced The Meat of the Matter as part of the PBS Television Food Forward series that was filmed over 70 shooting days in the field in 2013. The series profiles “food rebels” who are working on important topics as they strive to improve, and provide, alternatives to the industrialized food system. All 13 episodes are available online at video.pbs.org for streaming.

Most Americans have never stepped foot on a farm or ranch or even spoken with the people who grow and raise the food we eat. Farmland takes a look at the lives of several farmers and ranchers, all in their 20s, and all responsible for running their own agriculture businesses. Director James Moll traveled across the country to capture a first-hand glimpse into this high-risk/high-reward job, along the way discovering the passion these farmers have for a way of life that has been passed down from generation to generation, yet continues to evolve.

About the filmmaker: James Moll is a film producer and director whose documentary work has earned him an Academy Award, two Emmys, and a Grammy. His works include Price for Peace, The Last Days, Running the Sahara, and Inheritance.

8 Moons Ripe: A Woman in Her Garden

This film documents one woman’s quest to grow her own food, a journey that takes place over 8 months in her home garden of forty 100-square foot beds. This quiet and rhythmic meditation was filmed in Columbia County.

About the filmmaker: Gretchen Wall lives on 1.5 acres in Columbia County with her husband, Gary, children Emily and Ian, and 11 chickens. When working at Little Seed Gardens several years ago, she was asked to cultivate the swiss chard. She realized that she didn’t know what cultivate meant and had never heard of swiss chard. Clearly, she’s come a long way! Special thanks to 10 year old Ian, whose “playing” of drift wood on the beach is used as the opening music to this film. 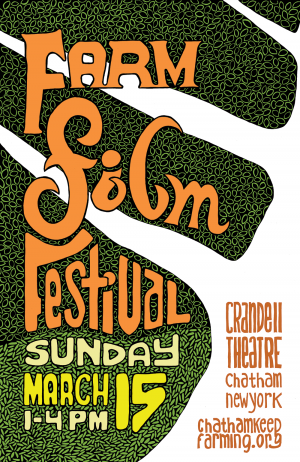