Filmmaker: eatTV
All milk is not created equally. So says Sam Simon, who ditched his career as a successful orthopedic surgeon to start Plankenhorn Farm, a small farm that produces what he calls premium quality dairy products. In the past 30 years, New York State has lost 75% of its dairy farms. With low milk prices, high production costs, and competition from industrialized farming, farm after farm has shuttered. New York still ranks third in the country for milk production, but it’s being produced on larger, increasingly more productive farms. Includes footage of Ronnybrook Farm and the Hudson Valley Fresh cooperative. 2012. 5:40 mins

Farming is a vital influence on the landscape, economy, and culture in the Pioneer Valley of Western Massachusetts. Images collected frame by frame on vivid Super 8mm color film create an expressionistic experience of the shapes, patterns, and textures of local agriculture. Time becomes malleable. The camera emphasizes geometry, plays with light and shadow, and animates inert machinery. Shown at Films at the Farm (Amherst, MA), Milwaukee Underground Film Festival, and Experimental Film Festival Portland (Oregon) and others.

Farmers, Filmmakers and Movie Goers: Immediately following the festival, please join us at The Pub
(Peint O Gwrw at 36 Main Street) for our annual Meet Your Maker Reception. Enjoy complementary snacks featuring local foods as well as a cash bar, and mingle with your neighbors. 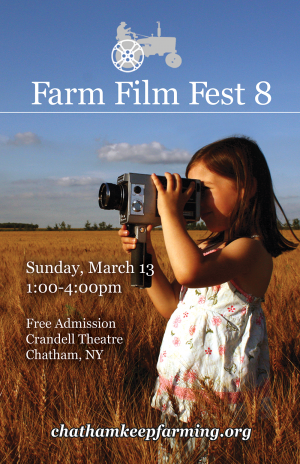