Produced by: Empire State Development for the New York State Department of Agriculture and Markets
2018. 2:00 min.

Blueberries are fun to pick and can be found in upstate NY late June into September. Joseph Gilbert and Alexia Baker of The Chatham Berry Farm talk to us about the history of the farm, their pesticide-free practices, their community, and of course, blueberries!

A Farmer Discovers Her Roots, One Veggie at a Time

Adopted as a baby from Korea and raised in Long Island, NY, Kristyn Leach grew up on pizza and bagels. But as a young adult, she became fascinated with her birth country’s cuisine—eventually traveling back for the first time since her adoption. There, she spent three weeks meeting with and learning from farmers. The trip didn’t just reconnect Kristyn to her past; it transformed her future. She now practices “natural farming” techniques in Winters, CA, and provides produce to Bay Area restaurant Namu Gaji.

A Visit to Abe’s Acres

A profile of Gabriel Siciliano’s first season farming Abe’s Acres in Hightstown, NJ. Gabe practices sustainable agriculture on the farm established by his great-grandfather in 1933. He is committed to being a steward of the land for the next generation. In memory of director and producer Jamie Wason

Just for fun, a spoof on the idea of “milk” being a product of nuts, not cows. All kidding aside, there are issues around what can be called “milk” for commercial purposes.

An Oasis in the Midst of a Food Desert

When Reverend Richard Joyner began to take notice of the increasing number of funerals he was presiding over in rural Conetoe, NC, he knew something needed to be done. Without access to affordable food and produce, the town was considered a food desert. With the help of the community, Reverend Joyner began a local farm to provide residents with fresh fruit and vegetables at an affordable price.

Keith Bogdanovich of Love Apple Farm shares the challenges and pleasures of growing peaches in the Hudson Valley. Keith is the Operations Manager and he oversees the orchards. Love Apple Farm is located in Ghent, NY.

Manuel Juraci Vieir needed a way to transport the honey he would collect from his beehives on his farm back to his home. His solution? His donkey, Boneco. Outfitted in his very own homemade beekeeping suit, Boneco tags alongside Vieira, helping him carry the honey they gather during their hauls. Working together, the unlikely colleagues and friends are able to harvest more of the sweet stuff than possible with Vieira working alone.

Industrial hemp has been pot’s controversial cousin for decades. But in recent years, the stigma around the world’s most useful plant has started to change and efforts to decriminalize hemp growing are increasing.

This documentary (in progress) tells the story of how hands-on conservation of NY state-endangered, federally-protected species was embraced by farmers and other private landowners. Some dairy farmers are benefiting financially from stewarding their land for North America’s smallest turtle. Interviews and intimate Bog Turtle field footage provide insight into the uniqueness of this species and its habitat.

Students planted butternut squash seeds in the PS 32 Children’s Garden with Commissioner, NYS Department of Agriculture and Markets, Richard “RB” Ball, who took the planters to Schoharie Valley Farms and planted them. In September a group of kids took a charter bus up to the farm to harvest their squash! Rotating groups of students working with The Media Spot filmed the action and interviewed Richard and each other. Now they are using writing combined with video editing to tell their story and create educational videos to help the PS 32 Children’s Garden continue to grow.

The world faces the challenge of feeding an estimated population of nine billion people in 2050. This issue needs to be considered from a thoughtful, global perspective.

Amid a brutally polarized debate marked by passion, suspicion, and confusion, Food Evolution looks at one of the most critical questions facing the world today—that of food security—and demonstrates the desperate need for common sense, solid information, and calm logical deliberation. Using the often angry and emotional controversy over genetically-modified foods as its entry point, the film shows how easily fear and misinformation can overwhelm objective, evidence-based analysis. The film takes the position that science and scientists hold the key to solving the food crisis.

Food Evolution is narrated by Dr. Neil deGrasse Tyson. The film premiered at the NYC DOC film festival in November 2016 and has been screened at a number of film festivals in the U.S. and Europe since that time.

Join Us For These Special Events Following the Films

Post Film Discussion at the Crandell Theatre with Filmmakers and Farmers

Moderator:
Daniel Franck, Ph.D. Dan is a botanist who received his Ph.D. from the University of California, Berkeley. He has 35 years of experience in the development of science materials and is currently Director of Science Curriculum at the Core Knowledge Foundation.

At The People’s Pub, 36 Main Street, following the Post-Film Discussion

Farmers, filmmakers and movie goers, please join us. Enjoy complimentary snacks featuring local foods as well as a cash bar, and mingle with your neighbors. 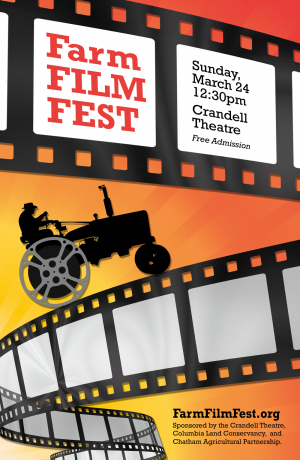